On July 30, 2015,  Tim and I took an incredible taxi ride up The Paron Valley in The Cordillera Blanca.  The road climbed relentlessly up the cliff laden valley.  I craned my neck out both windows gaping at the giant cliffs above, and crossed my fingers that we wouldn’t be taken out by rockfall on the road. Piles of fallen rocks cradled the steep drop offs from the towering cliffs overhead.  “Is that The Sphinx?” I kept asking pointing to cliff after cliff.

Zarela had conveniently arranged a taxi driver who was also a porter.  A two hour taxi ride and a two hour hike with two porters cost us less than 600 soles, about $160 dollars.  We stayed at the Casa de Zarela in Huaraz and also conveniently stored our extra luggage there when we ventured into the mountains.  This would be our last trip this season out of Huaraz.  The first was in early June into The Ishinca Valley, followed by The Santa Cruz Valley for Alpamayo, next Hatun Machay for sport climbing, and The Huayhuash with Josh Wharton and Stanley.  The other trips we were able to hire donkeys, but this trail was too steep, luckily it was short.

Basecamp was amazing!  Flat sandy sites with fresh running water and incredible views with a casual walk to the impeccable stone called El Esfinge.  We called this home for almost two weeks.  Most climbers come in for a few days and try their luck on the most popular 1985 route.  We met climbers from various countries, surprisingly none from the states over that two week period.  Camp was never too busy and we often had it to ourselves.

I’d heard about The Sphinx from Janet Bergman and Sarah Garlick, two of my favorite climbing partners.  It has been on my wish list ever since.  They said it was amazing and that it kicked their arses.  When we crested the hill and it came into full view, I stopped dead in my tracks with the mixture of awe and fear that attracts a certain breed.  The unknown:  How hard is 6C up there? How long will it take us? Will the weather be good enough? Am I good enough?  My palms began to sweat.

I am an okay climber, but I am an awesome camper.  I couldn’t have been more happy in a five star hotel.  We were alone with the full moon rising over snow covered mountains and El Esfinge beaconing us.  We ate like royalty compared to other climbers.  The porters were well paid to carry lots of fresh fruit and vegetables to our new home.

The following day, we walked to the base and climbed the first two pitches.  The next day, we left in the dark and climbed our top rope as the darkness faded into light.  The plan was for Tim to lead the first block of 9 pitches and me to finish it off for the last 10 or so.

The plan was modified when Tim had to “use the restroom” at the base of the crux pitch.  I could smell that it would be best for me to volunteer for this lead and quickly continued upwards with the help of my cams.  Tim took back over through a couple of wide awkward pitches finally bringing us to the bivy ledge, also the most common place to bail with equipped rappells to the ground.  We were making good time, but it looked like miles of granite to the summit. Route finding became more difficult and I stretched the 70m rope pitch after pitch in a sea of choices, while Tim shivered at the belays as the sun had left the face on its journey west hours ago.  The topo was vague for the upper wall and suggested trending hard right on the final pitches.  I saw pitons in the black rock and the summit was getting close, as was sunset.  “Where are you going?” I heard Tim yell as I made some moves into slightly overhanging terrain.  “Up” I told him and myself with that drive that comes when you know the dark clock is ticking.  The summit was close now, and this next pitch looked harder.  I started up, but got afraid of making an unprotected move above the belay ledge.  Tim noticed some webbing out right and we decided to try that way.  I made a few slab moves around the bulge leading to a blank exposed drop off. The webbing had a carabiner and I used it to return to the belay.  “Not that way” I moaned, and asked my rope gun to get us to the top.  Tim quickly dispatched the move off the ledge, cranked a couple thin moves and stretched the rope to the summit on one of the best pitches of the climb.  The light was incredible as we left the shaded face.  This pitch was a direct line to the summit cairn and we snapped a few photos before walking the ridge into night.

When darkness comes, the hurry leaves.  It is a nice sensation knowing there is no longer any rush.  It’s time to put on the rest of your clothes, turn on the headlamps and get down safely…. Or bivy! As much as I like the occasional night out, three rappells and an hour walk wasn’t going to warrant it on this one.

After 15 or so hours, we climbed 2000feet at altitude and made it back to camp paradise.  Not quite as impressive as Josh Wharton’s 2hr free solo, but it was a dream come true.  After a day of rest, we set on the quest to make Tim’s dream of climbing Cruz Del Sur next. 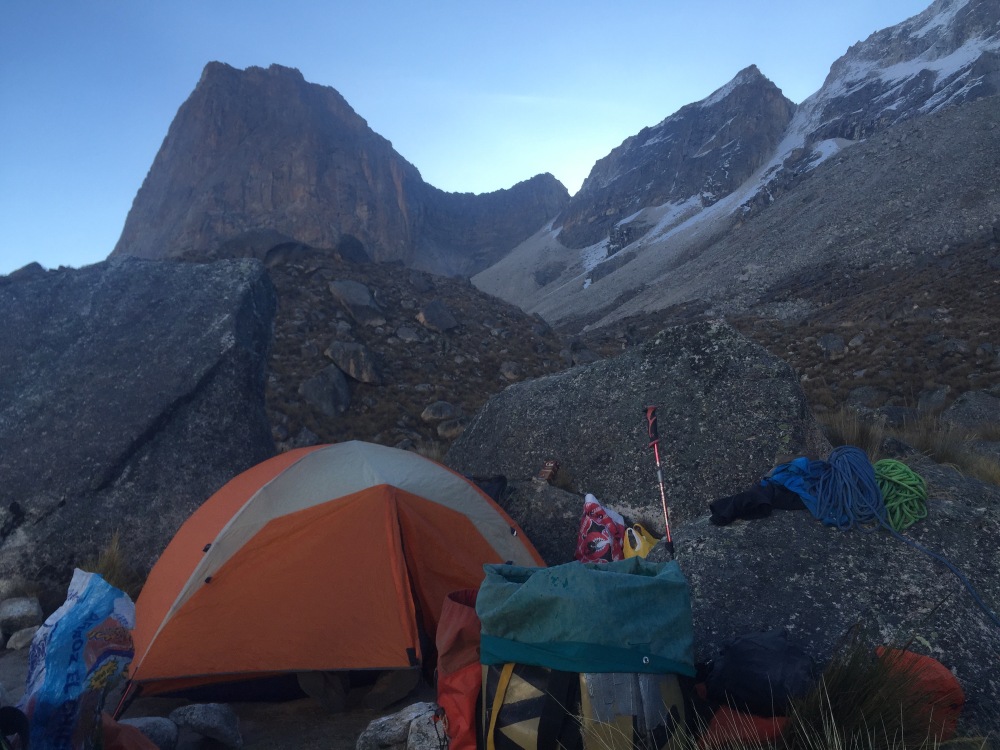 Knowing the 1985 route was the easiest on the wall, and the Cruz route was described to have excellent hard climbing with run outs, I volunteered to give Tim a good belay. 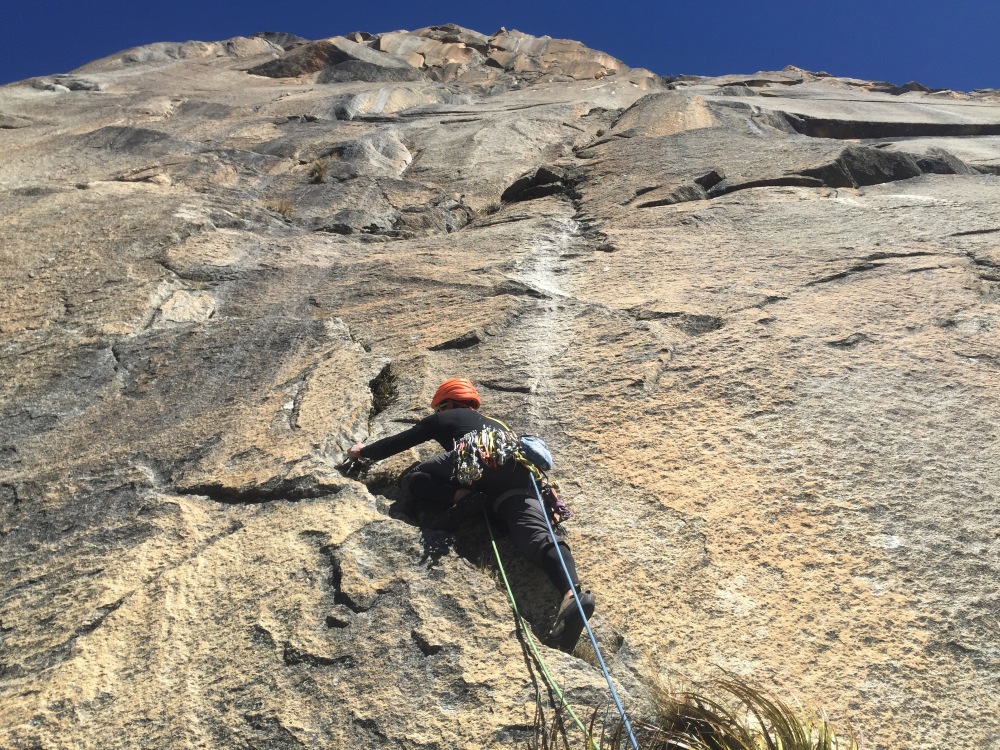 The start of Cruz Del Sur.  Climb through the sharp plant to the smooth sailing above.  The picture below is actually on a route on the right side, possibly Intuition?

Tim on top of the world after crushing Cruz Del Sur!

Luckily, I didn’t have to catch him as it would have been serious airtime!   I have no idea how he stayed so calm up there.  The holds were tiny and the reaches long.  One section followed a heady dike where the moves seemed to get harder the further away you got from the spacious bolts. The suggested rack was a single set and it became clear as we climbed steep clean faces lacking cracks on golden granite.  Every pitch dealt sustained thin climbing. Cruz Del Sur was insanely good and hard! It was like a beautiful canvas of art the first ascensionists painted in bold style.  We summited well before sunset climbing the same final pitches we did before.

Beautiful Peruvian fabric on the summit cairn!  Below, my favorite plant on the commute to El Esfinge. 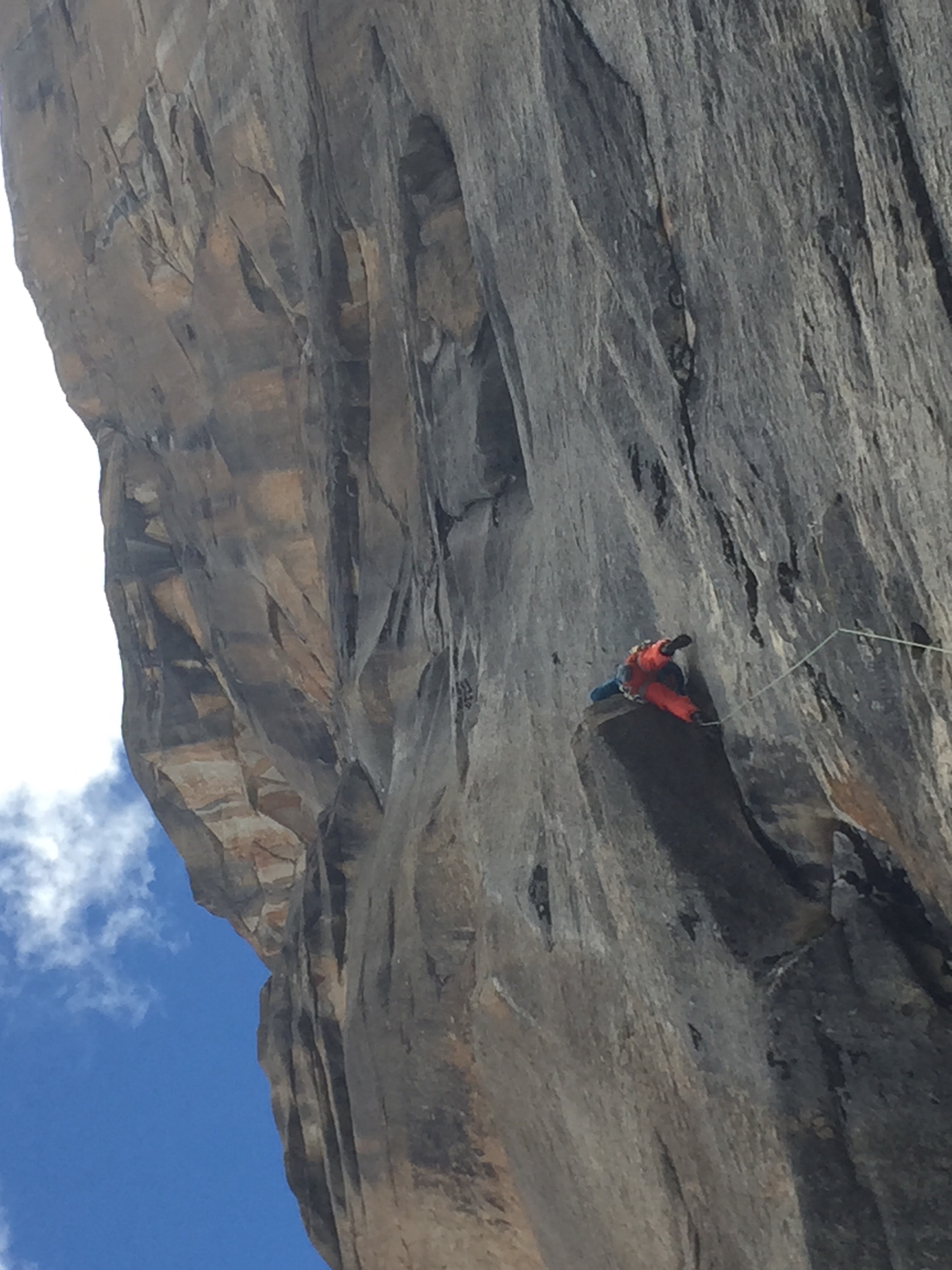 Tim exploring the right side of El Esfinge. The only dirt we found up there! Pretty nice after a little cleaning.
After another rest day, we looked for lines on the right side of the cliff.  We thought we were on Intuition, but it may have been Checos Banditos.  The new climbing guidebook for Huaraz is awesome, however, the section on El Esfinge has inaccurate info.  We explored a few options, but got thwarted on our 3rd summit bid by snowflakes and an approaching storm.

We left content with snow on the ledges and a yearning to return.  We arrived back to Zarela’s feeling pretty lucky to spend the last two and a half months in and out of her house.  On our shared birthday, June 19th, Zarela had a fresh baked cake with our names frosted and delicious Pisco sours to celebrate!   She made our trip even more awesome!  I drew her a picture to say Thanks!

I live in a small cabin in Alaska off the grid. I work in March and April ski guiding for Valdez Heki Ski Guides for the past 20+ years. I worked as a whitewater guide in Alaska for 15 years, primarily on the 6 mile river near Hope with Nova Riverrunners. I spend summer months working in the Alaska Range for Alaska Mountaineering School. I also work as a Safety Guide on film productions. In my off time, I travel the world in search of adventure!
%d bloggers like this: